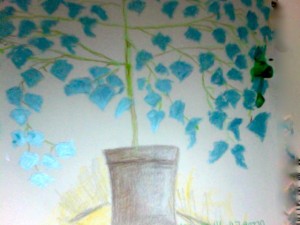 Aloha to my reader.

With whole heart and clear seeing of what IS I am daily singing to my Mother Earth Soul Languages of Gratitude. She is not only my real mom for my ph-Y-see-call body finite self. She is tiredlessly teaching me as a way shower, taking me to her true places, chakras, mind, magical realms, other dimensions. Mother Earth is also the finite version of the ORiginal Infinite Mother of All Creation. When I go sleep I am with Infinite Original Mother. The Earth Mother showing what the Sun is helping Her with and how the Sun has turned white (maybe like in July or August of a New Earth year one,   year 2013). Earth pointed out to me that the spirit of a bee went into the chakra worlds of the sun (and I don’t know yet exactly how the sun’s chakras work and or how they look like, I only am having an in-clink there must be chakras it only makes me sense).Earth showed me the solar system is the 3rd chakra of this cosmic body while this galaxy and it’s milky way looks like one of trillions of star ships from a distance lost in traffic of other galaxies. Earth is presenting me with growing and glowing turquoise  frequency. It has been building up. The first time I actually have seen this was during a dream maybe in 2010. The dream was about some office where I was working (if that is the case?) and was taking care of this interesting tree that people in this office seemed to be oblivious. The tree was of  metallic silvery turquoise tones with squares like  leaves (lives), these squares reshaping them selves — upon my arrival to be taking care of this plant- into more like circle and or oval body shape like leaf-lets. Very interesting. One could also notice in this lucid dream that the tree moved when you were there and acknowledged your presence. I drew a picture of it and might put it here in case the text is too dry to you. Mother Earth is most frequent Presence in my dreams. I often see her in the appearance of a woman resembling my biological mother but truly these two beings are very far in their conscious awareness as far as my observation has been so far. (I am making a stop here to make a little branch of my observations about “mother”. The biological one was abducted. This is a statement I can make after a long time doing and working with energy, healing, meditation, searching inside of my self, revelations, dream work, ;and many years of torture disappointments, hopes, getting away from the role of being a daughter/slave. So the biological mom was abducted by Grays, the life then became dark and I  found my self each night to leave the body and run upstairs (meaning the original Home where I come from as soul and my Spirit) for some air and support and problem solving skills I think). It is important to see clearly and acknowledge old truth that yes people have been abducted . Since long time it has been very strange to be around this mother and I felt sorry for her not really knowing in the child’s perspective why she felt strange. I thought if I keep working very hard and for my savings will keep bringing her flowers her life might lighten up. It took long time to come to terms with it and have a broader understanding that no matter what I did or didn’t do (free will also) it just wasn’t good enough. (Effect: low self-esteem or non) It is very difficult on the biological system to be existing without any soul essence, one retrieves to be taking energy from others. The political situation was never very pink looking. Why? In my view because the sacred feminine has left long time ago.   There was just another invasion happening (the 1968) , divorce caused by my mother’s insecurities and lack of discernment  brought the entire family to absolute trash. I have developed a lot of loneliness to my own detriment at times. There was NO communication what so ever, lots of guessing and feeling the air what it is like, should one come in or should one stay outside as long as possible, growing on your own. My father leaving early for good. And all these hidden gifts used much later on.

Turns out one  to be guided to develop many abilities, continuous discernment in mass of confusion and stupidity (not that I knew about anything until I became around 32).When I was mom my self I completely have abandoned the ugly from my previous home and swung the pendulum to the opposite side. That side was mine side of love, protection, safety, warmth, learning and teachings, respect and enormous affinity towards children, babies, and life. That was really neat and gave lots of opportunities for personal growth through mistakes, errors, lack of help, healing and rejuvenation on many levels, altho on the physical lots of exhaustion as every parent has known and beyond. Beloved life stretches you and lengthen you. Life is truly beautiful and fantastic. What is not fantastic is the believe system, violation thing made {NOT CREATED}believe synthetically: schooling, government, politics, equals lies, deception, wrong husband, wife, taxes, war, GMO, commercials, mistrust in one another and the knowledge from where all of this is coming? As  one human being is being violated so is the planet and life it self. In that there is a connection of oneness. So from the same is coming this one collective dreaming that some people speak of. The bright people are being tested and vulcanized, galvanized, chilled, turned inside out, they have to learn to cross the oceans of millions of emotions learning along side swimming in them, or sink till the bottom is reached, repeated, move the mountains, overcome ones own death and learn to become the re-birth in one life time. Why? because the “IN-CAR -NATION the way it has been must change. We earn to go much farther and stop incarnating like the yo-yo.  Our Most beautiful mighty Mother Earth/Gaia has been  abducted out of her Natural habitat, so have been the humanity. We have become very aware of the cannibalistic criminals of very hostile race(s) to make live impossibible. Gaia under enormous pressure, and death trials.  For  thousands of many life times. As a result there was a depression, but seeing the center and seeing through all of this (and obviously we are not talking into a great details about everything, such as the soul trials, their abductions, separation from TRUE SOUL GROUPS for natural evolution, the synthetically created lack contrary to Gaia and Her original purpose), I knew any kind of sickness, lack, depression, bad mood, fight, it was all part of very well constructed machine, programs, installed in our reptilian brains starting at the young age of schooling, instead of education. For as Gaia has said to me when I was actually very young, one day I hear this “Blue Gene/Jean” ANd I didn’t have a Clue who said that and or what it was or meant. It took about 35 years for me to learn from Earth via my own  experiences, that Her original purpose is a seedling of DNA life on biological planets the most natural ways, which is why we procreate the way we do.THen sharing these DNA Seeds of life to other planets, maybe. It is a blessing this way and so it is to have emotional body. If we learn to work it for us:  The best part is the emotional intelligence of the heart, since everything starts here from the heart as  have said before. There has been the practice of a group  meditations with Mother Gaia that has been for few years now going on.It benevolently affects our planet and the collective consciousness.  The last one was just yesterday. The Highlight was that there are available many more levels of this turquoise energy, now I know it is an intelligent energy for stipulating rampant changes for to heal Gaia Herself completely and help Her to re-grow Her Original Golden Light.  Mother Earth took me through Her  “over all picture” of the “physical” which was pretty nasty looking for all the  grayness due to the ongoing chemical  poisonous cocktails that people are being treated with against their consent from the chemtrails.Then Mother Earth took me behind the scenes where I could experiences sparks of Her Happy New body. This Surface as it is transmuting is being growing alive pure gold and I was told to keep growing my own gold/en light which is very real, to keep grow it within my self. (and that is the fresh experience I got so I can share it with you). It also works as a deflector and transmuter of  any unwilling (to change their tone towards humanity and Earth), chemtrails. Because of many years of meditation , working with healing energies and learning constantly new things,and being physically active in yoga and sports,  we can much easily expand at the soul level. This is good for many things for example to change the weather programs, to communicate better with Mother Earth and humanity as a collective.

I truly felt very grateful again and happier for the experience and a new emotion that I have from this meditation. I have also de terminated for my self very firmly that no matter what, I will be using my free will power to stand strong especially at time when I miss my children which has been extremely hard on  my heart and has affected for many years my awareness and my work, the quality of life.Or being targeted by psychic parasites,and egoic thought forms, all engineered to steer you towards staying depressed and negative, in-active, out of touch.  I feel that humanity is originally family oriented, human has special gift. But because they have been downgraded by the machine and its tools such as TV (TURN IT OFF IT DOESN’ T LOVE YOU), then the nanny-government, very poisoned water and food it has completely  almost forgotten its true purpose. (who needs it, I keep saying and showing it to my self, if the care giver, the husband, boss, who ever is not co-creative and is abusive, violating you, go away, leave and DO YOUR OWN THING, Be sovereign, self-governed, listen to your heart. Be aware of what is happening but don’t let it to pull you down to its own pore level. For down there at that level is very cold, it is blind and love-less. I am not having that. Mother Earth keeps doing Her own thing as well. Also do realize the Nature doesn’t charge you for any of Her gifts and nourishment. And so these words that My heart is  not in favor of approving of but rather be speaking the heart and soul languages, in any account these small plain texts that I am putting here on occasion, are designed to charge you  with courage and love.